A stoppage time penalty from Emily van Egmond has handed Canberra United a heartbreaking 2-1 defeat at the hands of Melbourne City in front of 1293 fans at McKellar Park on Sunday afternoon.

Both sides had enough chances to win the entertaining clash, but it seemed as though neither would until the referee pointed to the spot deep into injury time.

Melbourne City controlled most of the first half, with United barely registering a touch of the ball in the opening five minutes.

One of City’s better chances came as former Canberra player Ellie Carpenter won possession on  halfway and launched an attack, but Melbourne were unable to capitalise on an overlap as Milica Mijatovic sent her shot wide.

City were on the attack again on the half hour mark when a pinpoint cross found the head of Kyah Simon whose effort was easily dealt with by United keeper Sham Khamis.

As the first half came to an end, City had one last attacking opportunity when Carpenter made a break down the right wing, but a pinpoint tackle from an outstretched Karly Roestbakken stopped the attack in its tracks.

Melbourne were on the attack straight after the break with van Egmond forcing a super save from Khamis as she unleashed from inside the 6-yard box. 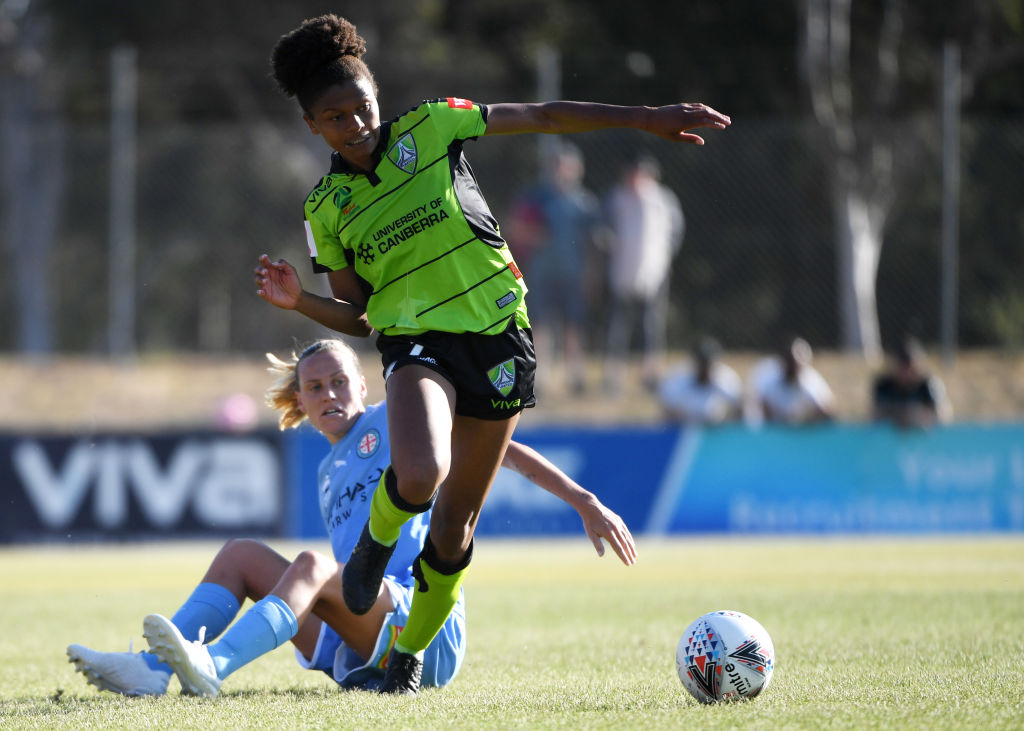 Things finally began to turn around for Canberra early in the second half when last week’s match-winner Simone Charley cut inside and smoked three City defenders with her speed and beat another with skill before launching a shot which City were able to block.

Just shy of the hour mark United found the breakthrough when Charley won the ball for Camila, allowing the Brazilian to unleash an almighty shot from outside the box which struck the post and fell to a waiting Katie Stengel who tapped the ball into an open net.

The lead didn’t last for long though, with Mijatovic able to equalise for City as she curled the ball past Khamis after being on the end of a clever through ball.

It looked like United would launch an immediate reply when Charley received the ball on the right wing before cutting inside and launching a shot nearly identical to last week’s goal of the year contender, only this time the effort hit the post and bounced out.

As the match drew to an end City launched one final, fateful attack.

Starting from a wide position, City moved the ball towards goal with a series of passes and as the ball reached Yukari Kinga, Jessie Rasschaert moved in and made enough contact for the referee to award a penalty to the visitors.

While Khamis correctly guessed van Egmond’s penalty kick, the shot would slide into the bottom corner and hand City the three points.

Despite going down late, Canberra United coach Heather Garriock was full of praise for her side.

“What we’ve built in the last six weeks, we’re disappointed to lose today to a star studded lineup with Melbourne City.

“We’re walking away with a lot of positives and with our head held high.”

Canberra United will now turn their attention to next week, when they take on the Newcastle Jets at McDonald Jones Stadium on Saturday.