Canberra United have defeated Adelaide United 3-1 in an entertaining encounter in front of 1,202 fans at McKellar Park, snapping a four match losing streak.

Norwegian striker Elise Thorsnes had plenty of joy down the left-wing in the first half, first having her shot blocked by a defender before minutes later unleashing a cracking right-footed volley that sailed over the crossbar.

United’s defence did look vulnerable during the opening 15 minutes, with Adelaide wasting a three-on-two opportunity when a pass went astray.

Emma Stanbury played her best game in a United shirt, dictating the midfield and finding key passes to forwards Leena Khamis and Thorsnes.

United’s best chance of the opening half-hour fell to their Norwegian striker, who cut back inside on her right foot and rifled a shot that looked destined to hit the back of the net. But a deflection took some pace off the strike, allowing for Sarah Willacy to dive to her right and push the ball out for a corner.

Willacy pulled off back-to-back sensational saves, snuffing out a one-on-one chance against Simone Charley before pulling off a stunning stop to thwart Leena Khamis but she could only get a touch to a brilliant Laura Hughes strike.

Finding the ball at the edge of the box, Hughes bent the ball into the side netting for her first-ever goal in the Westfield W-League. 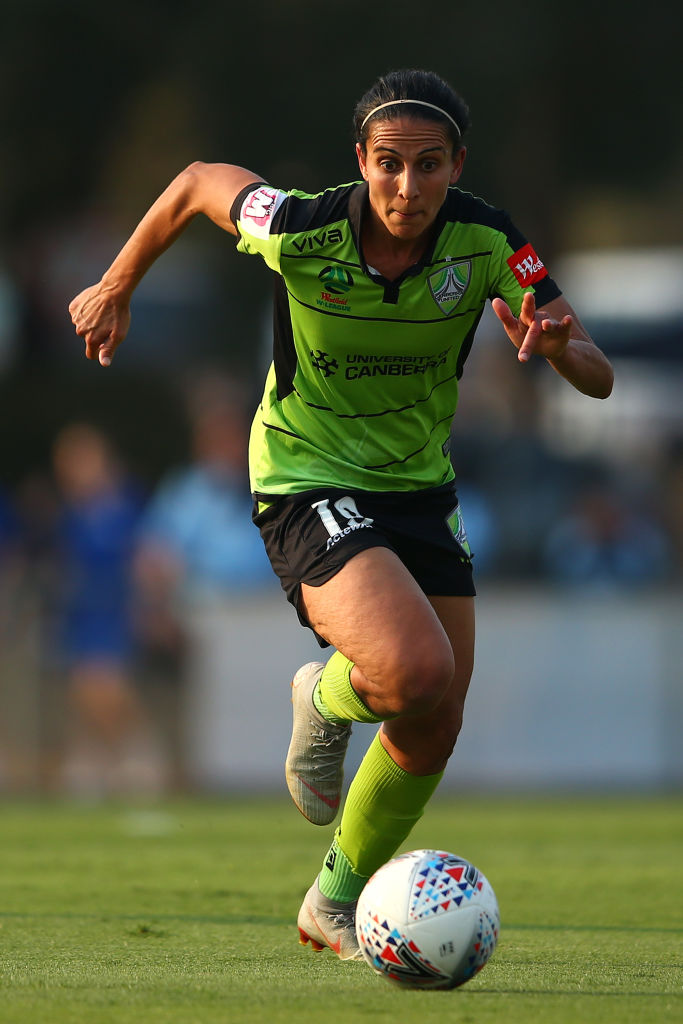 Just moments before half-time, Adelaide United were level after Canberra’s defence fell asleep and Isabella Hodgson buried her shot into the bottom corner.

United started the second half brightly with Willacy again stopping Thorsnes from getting on to the scoresheet, saving the strike with her feet.

Adelaide had chances of their own and could have scored at least a couple more but it was Canberra retook the lead in the 68th minute after a slick Leena Khamis finish found its way past a diving Willacy and into the bottom corner.

The entire team ran to the sideline to celebrate with coach Heather Garriock in front of a raucous grandstand.

United put the result beyond doubt with a brilliant team goal. Calmly working the ball from the back, Karly Roestbakken broke into the midfield as she drove past several Adelaide players before passing the ball wide to Thorsnes, whose brilliant cross found the head of Simone Charley.

Head coach Heather Garriock lauded her side after just their fourth win of the 2019/20 Westfield W-League season.

“The players that I have signed are the ones that performed today, especially when it counted,” Garriock said post-match. “In particular Laura Hughes, who scored a great goal to kickstart the game. I am really proud of her.

“The character that we saw out there was exceptionally. The third goal was probably one of the best goals I’ve seen by a team, especially under me.

“I am just delighted to get the win. I am so proud of these players.”