Michelle Heyman returns for Season 8 of the Westfield W-League.

Canberra United are delighted to announce that Matildas striker Michelle Heyman has agreed to return to the club for Season Eight of the Westfield W-League. The forward, who was a part of the successful Australian FIFA World Cup team, has signed terms that will guarantee she’ll stay with the W-League champions for a sixth successive year.

“It’s great news that Michelle has agreed to return to Canberra for the 2015/2016 Westfield W-League season,” Canberra United CEO Heather Reid said. “Michelle was an integral part of our successful title winning side last season and we are delighted that our negotiations for Season 8 have been successful.”

Heyman is Canberra United’s leading goalscorer of all time with a remarkable record of 39 goals in 61 appearances for the club and an overall Westfield W-League strike rate of 50 goals in 75 matches. Twice winner of the league’s Golden Boot, Heyman scored eight times in 2014/2015 as Canberra finished third on the league ladder before defeating Melbourne Victory and Perth Glory to win their second title. 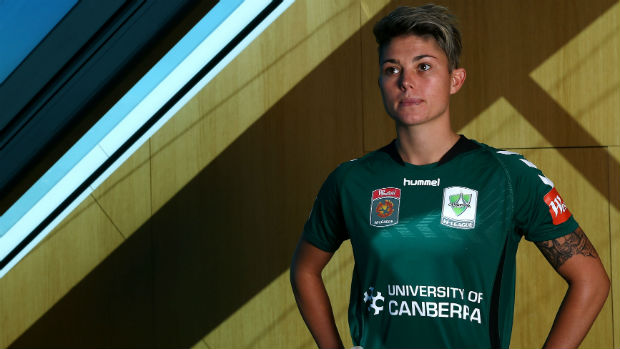 The signing of Heyman is the first of many that the club will be announcing during the next few weeks as new Head Coach Rae Dower builds a squad to defend the silverware won in dramatic style in Western Australia in December 2014.

“We are currently in discussion with a number of players who have indicated an interest in coming to Canberra United for the new season of Westfield W-League football,” Dower commented. “The process of signing players will begin shortly and we will release information when we have it.”

Heyman is currently playing in the US WNSL for Western New York Flash. She is expected to join the Matildas again in September for two games against the World Champions, USA, before returning to Canberra later that month to begin training with Canberra United.

Canberra United begins the defence of their Westfield W-League crown in October.